On Saturday, the New York Knicks guard Jalen Brunson scored 13 points playing against the Dallas Mavericks for the first time since he signed with the Knicks on July 12, but his current team fell for the sixth time in its past eight games.

“To be honest, not fun,” Brunson said when asked what it was like playing against his former team, via ESPN. “They played great tonight. You got to give them credit. No matter who is on the floor, my approach stays the same. But to see them after the game and shake their hands, that was pretty cool.”

Jalen Brunson on Wizards: “They came out ready to play” 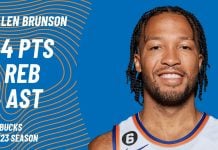 Jalen Brunson: “I gotta treat possessions like they mean the world to me”