Vice president of the National Basketball Players Association, Jaylen Brown, said he made an error in supporting a tweet that showed a Black Hebrew Israelite group standing in solidarity outside Barclays Center before the Brooklyn Nets point guard Kyrie Irving’s return.

“I was not aware of what specific group that was outside of Barclay’s Center tonight,” Brown wrote. “I was celebrating the unification of our people welcoming the return of Kyrie to the court, first glance I thought it was a known fraternity the (C/Que’s) Omega psi phi (step’n) showing support.” 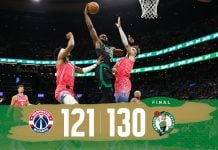