Memphis Grizzlies franchise star was carried off the court and took a premature exit after sustaining an apparent ankle injury during his team’s eventual Friday win over the Oklahoma City Thunder.

Morant went off with 19 points, 11 assists, and seven rebounds in 32 minutes before signing off, as Tyus Jones replaced him at the point. Thankfully enough, the Grizz managed to grasp their lead en route to a 121-110 victory.

Memphis has been experiencing an injury bug so far with Desmond Bane (toe) and Ziaire Williams (knee) unavailable in the meantime. Per Damichael Cole of Memphis Commercial Appeal, Taylor Jenkins provided that the team will issue more updates about Morant’s status after a “tweaked” ankle. 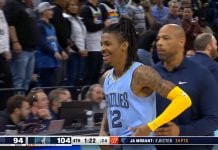