The sixth man in the NBA is often overlooked despite being a player that at times can be on the court for more minutes than some of the regular starters.

A sixth man needs to have an immediate impact on the court and be able to take anybody’s place meaning it is essential they are capable of scoring points as well as defending the basket.

When the Dallas Mavericks acquired Christian Wood in the off-season, they covered all bases as they brought in a top option who can be deployed as a power forward to regularly score three-pointers or as a centre to dictate his team’s play and create chances and space for others acting as a decoy in the offence.

If the Mavericks are to reach the NBA playoffs for a consecutive season and mount a serious challenge to become the eventual champions, Wood will likely be the vital addition that ignites. Betting options for the NBA this season can be found at Bonus Finder where there is a list of apps that will be available in Ohio. Many sportsbook apps will open in 2023 for Ohioans to betting on basketball and many other sports with several sign-up offers available.

Wood has averaged 19 points per game over six encounters so far which ranks him at joint 10th in the entire NBA which is remarkable for a non-starter as he is outscoring some teams’ main point provider.

His ability to protect the rim and score consistently means he provides the aerial support that the Mavericks have been in desperate need of. He also reduces the gap in quality when some of the stars of the team come off as some would argue he is the team’s second-best player currently.

Wood’s 7.8 rebounds per game certainly suggest he could be the solution to their defensive issues of winning rebounds following the opposition’s missed shots. One of the drawbacks of the Mavericks’ playoff run.

Rebounds are vital to manipulating the momentum of games into a team’s favour; they can build scoring runs or put an end to the opposition’s scoring runs and regularly completing them is vital to winning games.

Wood ranks extremely low in the NBA rankings at one assist per game but this is not at all surprising as he is a power forward that tends to finish off the chances. He also indirectly assists his teammates with decoy movements.

The versatile unit is into his sixth season in the NBA and his experience and undeniable quality are unbelievable assets for the Mavericks to have available from the bench.

If he is to continue his strong early season form in a similar fashion then surely he will comfortably rank as the highest-quality sixth man throughout the season, backed up by the statistics.

He has already shown he is an exceptional coup for Jason Kidd, but he could wreak havoc for the opposition once he is given more minutes on the court per game, as for now he is being integrated relatively slowly.

Reggie Bullock on Christian Wood: “We miss him” 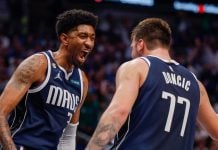 Christian Wood: “People talked about how bad my defense was”