Using his signature mid-range shot in front of the San Antonio crowd, DeMar DeRozan can’t ask for a much better move and place to finally climb on another scoring feat.

On Friday, DeRozan drained a perimeter jumper in the middle of the first frame of the Chicago Bulls’ road game against the Spurs – pulling himself up to the historic 20,000 points club.

Following the field goal made, his former mentor and Spurs coach Gregg Popovich called for a timeout to briefly honor his achievement. As time went on, the two shared a wholesome moment, as DeRozan and Popovich embraced each other to enjoy the milestone.

Right at the post-game interview, Popovich can only be proud and delighted about the recent individual success made by DeRozan, whom he coached for three years in Texas.

“(DeMar DeRozan is) a beautiful, wonderful human being,” Popovich said. One of the best that I’ve ever coached. I still stay in touch with him. He’s just a sweet man.” 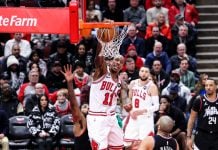