Italy national team head coach Gianmarco Pozzecco is one of the most emotional and animated coaches in basketball. The former player is always full of energy.

Yesterday his team upset Serbia led by Nikola Jokic in Round of 16 at this year’s EuroBasket (94-88). The win was even more sweet for Pozzecco who was sent to the locker late in the third quarter after Italy’s bench picked its second technical foul (the coach already had one).

That is when the Italians rallied and built the lead. As the game was about to end and it was clear that Italy will win in, Pozzecco emerged from the tunnel and was triumphant while his staff attempted to keep him away from getting close to the court.

It was Greece and Czech Republic that were set to play next in the arena. Pozzecco met Giannis Antetokounmpo in the corridor and jumped to hug him. 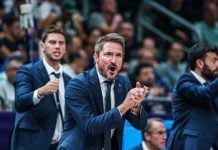 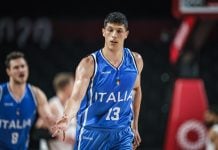 Gianmarco Pozzecco: “Fontecchio will be in NBA in one month and he’ll be a monster” 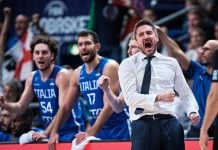 Gianmarco Pozzecco: “I want to watch my players continue to dream” Vladimir Lucic: “I don’t believe that Pozzecco contributed too much”