Spain outlasted Lithuania in a thrilling 102-94 OT victory. At the press conference after the game, American guard Lorenzo Brown (28 points and eight assists) said is happy to play for the Spanish national team as a naturalized player, via Eurohoops:

“Even if I haven’t been here long, I feel like these guys… They have known each other so long and they brought me in as one of them. So, it’s just an amazing feeling to have that brotherhood, “La Famiglia” as they call it. It’s really a family. I am coming in here and I am a regular American guy and those guys are talking in Spanish. And I am learning every single day, so it’s amazing what I have learned and how they treated me so far. The outside noise doesn’t bother me at all. I am just worried about what these guys feel about me. And it’s amazing. They love me and I love these guys,” Brown said. 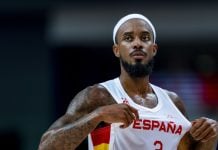 Mindaugas Kuzminskas: “I am not sure how this team would look without Lorenzo Brown”

EuroLeague Diaries: Jan Vesely has a career-night vs Zenit; Nikola Kalinic leads Crvena Zvezda to glory in the ‘red-and-white’ derby