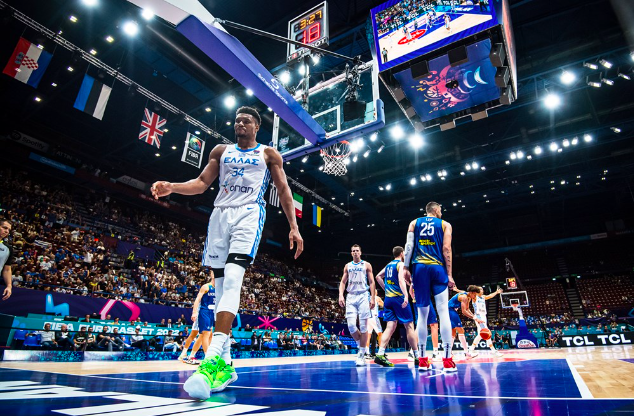 Following his 41-point explosion in their win over Ukraine, Giannis Antetokounmpo isn’t letting his Greece side get ahead of themselves.

The 99-79 victory maintained Greece’s unbeaten run at EuroBasket after four games, plus it further solidified their status as one of the favourites to lift the trophy in Berlin on September 18.

Antetokounmpo proved to be the talk of Milan with his scoring effort on the day proving to be the second highest points tally since 2001 bettered only by Dirk Nowitzki’s 43 points for Germany against Spain.

But the Milwaukee Bucks superstar isn’t letting the individual accolades and perfect records get in the way of what really matters.

Once the ball is thrown up in the air in Berlin, it’s a new ball game.

“I don’t know where this team can go, we’re trying to get better day by day,”Antetokounmpo said to Eurohoops.

“When we win, we can relax as a culture because we think we’re better, and we get cocky, but I’ve been in that position again, in 2014 at the FIBA World Cup. We went 5-0 in the group phase and lost by 25 points in the first knockout.

“We have created some very good things in this team already and are still getting better and bonding like a team, but should only focus on that. Only God knows what will happen. If I knew I wouldn’t play, I’d go straight there.

“We will be humble and focused. And in the last game against Estonia, we have to be good. It doesn’t matter that we have already secured the top spot. We hope we will be well, that Kostas [Antetokounmpo] will return and we will be good in the knockouts. We feel the love of our fans and we will do our best no matter the opponent.”

Right now, Antetokounmpo is enjoying his time with the national team. Playing with the same flair and class that we see him perform when he is with the Bucks, the ‘Greek Freak’ feels that he is making up for lost time as he hasn’t linked up with Greece since 2019.

I just try to go there and have fun as much as possible and try to create art,” he explained.

“What I mean is that every game is a different game. Every time I step on the floor, it’s a new experience for me, that I can remember, but I will say this: I think this is one of the years that I feel I am very, very excited to go out on the floor and play with my teammates.

“I don’t know if that’s because we haven’t played for a long time ago since 2019. I don’t [know] if it’s coach Itoudis and the way he motivates me, or just being out there playing with my teammates, but that’s all. I can say I am excited to get on the court every chance, every time with my teammates and the coaching staff we have.”

Greece complete their Group C schedule against Estonia on Thursday. 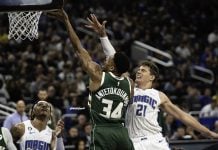