According to ESPN’s Adrian Wojnarowski, free agent big man Montrezl Harrell is signing a two-year deal with the Philadelphia 76ers, including a player option. Harrell brings more toughness to a team searching for it this offseason. He was Sixth Man of the Year with Doc Rivers/Sam Cassell in the 2019-2020 season with the Los Angeles Clippers.

Harrell had charges of marijuana trafficking reduced to a misdemeanor possession in a Madison County (KY) Courthouse recently. The charge will be expunged from his record after 12 months if Harrell gets in no further legal trouble.

James Harden played a part in bringing Harrell to Philadelphia too – both with his contract creating roster flexibility and recruiting him to take on the role of backup center with the Sixers. They have a history together with the Rockets.

Montrezl Harrell has played 7 seasons for 5 teams, including the Lakers and Rockets. He has averaged 12.9 points and 5.3 rebounds in 458 regular-season games. He has won 1 Sixth Man of the Year award. 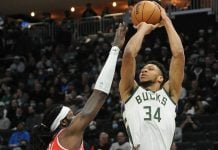