Mavericks’ owner Mark Cuban is in Cologne, Germany to watch his team’s superstar Luka Doncic play for Slovenia and this year’s EuroBasket.

The first game for the reigning European champions was against Lithuania. While, understandably, Cuban rooted for Luka, his second favorite team was the one that Slovenia played against.

According to the billionaire, his grandmother hails from the Baltic country which makes partly Lithuanian. “What you don’t know is that I’m 25% Lithuanian,” Cuban said, per Donatas Urbonas of BasketNews.

“My grandma is from Darbenai. I got to root for Luka, but there’s a part of me that if it’s not Luka, I’m cheering for Lithuania.” Coincidentally, Lithuania’s head coach Kazys Maksvytis was also born in Darbenai.

Fortunately for Cuban, it was Doncic’s Slovenia that won the game (92-85) to open the tournament with a victory. Luka finished the game with 14 points, 6 rebounds and 10 assists in 34 minutes play.

Cuban also attended a jersey retirement ceremony of the Mavs’ and Germany’s great Dirk Nowitzki which took place after the game between Slovenia and Lithuania. How Mark Cuban turned his first million dollars into a billion 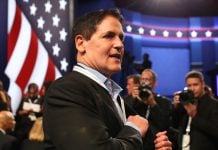 Taurean Prince still ‘at least a week away’ from returning in...