Vanessa Bryant, the widow of Kobe Bryant, was accidentally awarded an extra $1 million by a federal jury on Wednesday in her trial against Los Angeles County, via New York Post.

After awarding Bryant $16 million, a juror discovered an error on the verdict form and informed the court about it, USA Today reports. It’s now set to be reduced to $15 million following the clerical error, Judge John Walter told the outlet.

Vanessa Bryant is donating $16M to the Mamba and Mambacita Foundation

Frank Vogel on Vanessa Bryant’s speech: “Complete admiration for her strength & being able to handle that moment with class, dignity” 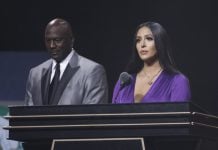 Vanessa Bryant on Kobe: “You did it. You’re in the Hall of Fame now. You’re a true champ”