“We would like to welcome Malcolm and his family to the Celtics,” said Celtics President of Basketball Operations, Brad Stevens. “We are very excited about what Malcolm brings both on and off the court. His resume speaks for itself. He is the kind of playmaker, shooter, and impact defender that we need in our continued pursuit of Banner 18.” ‘They’re the most winning organization in the league’: New Celtic Malcolm Brogdon details what is striking for him in the Boston franchise 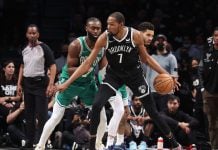 Malcolm Brogdon: “I want to come here and sacrifice to win”