Bronny James appears to have inherited athleticism from his father. The son of the Lakers superstar LeBron James made an emphatic one-handed 360 dunk during a warmup.

The 17-year-old guard is projected to enter the NBA in 2024 after spending a year in college. LeBron has previously stated that he wants to play together with his son in the league. 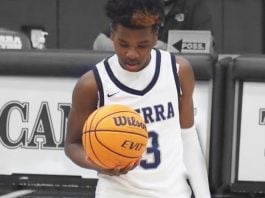