After a home-court win over the Golden State Warriors in Game 3, the Boston Celtics veteran forward Al Horford (11 points, 8 rebounds, 6 assists) reacted to his flagrant foul against the Warriors star guard Stephen Curry: “It happens, I understand that. I felt like it was a good contest … but yeah, it was a fair call.” 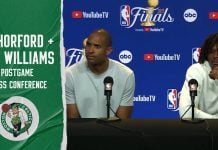 Al Horford on Game 6: “We have to see what we’re made of”