The NBA is home to some of the most dedicated players in sports, maximizing their physical abilities to bring home crucial points each game. But how often are players taking low-quality shots and not looking to attack the basket?

The Action Network is able to disclose the hardest-working players in the NBA, exploring the distance covered throughout the 2021-22 season and highlighting the calories each player and team burned on game days – revealing the hardest-working teams and stars.

Taking the No. 1 spot is Phoenix Suns’ wing Mikal Bridges. Bridges traveled an impressive 212.5 miles throughout the season and burned an estimated 38,055 calories.

Miles Bridges of the Charlotte Hornets fell short of first place by just 1.8 miles. The small forward, one of the NBA’s best dunkers, covered 210.7 miles during his 80 games last season, burning the most calories among the NBA’s top-10 hardest-working players.

Below is a list of the top-10 hardest-working players in the NBA:

It’s a close race when it comes to the NBA’s hardest-working teams, with the Toronto Raptors just placing ahead of the Charlotte Hornets. Traveling 1548.7 miles during the regular season, the Raptors finished fifth place in the Eastern Conference division.

While division winners in the Phoenix Suns and Miami Heat both rank high in terms of mileage last season, not all high-performing teams followed suit. In fact, the Eastern Conference’s Boston Celtics covered more than 200 miles less than the Raptors – only racking up 1,334.3 last season.

Full information can be found: https://www.actionnetwork.com/nba/the-hardest-working-nba-players 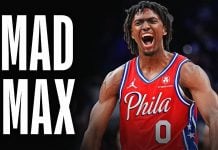 76ers’ Georges Niang on Tyrese Maxey: “I think we found a perennial All-Star”