On the other hand, the Slovenian star guard Luka Doncic posted 42 points along with eight assists for the Mavericks. The series shifts to Dallas for Game 3 on Sunday.

After a big win over the Dallas Mavericks in Game 2, the Golden State Warriors star guard Jordan Poole (23 points off the bench) was happy to be a part of Kevon Looney’s big playoff performances: “The little kid in me is so excited … I grew up watching Loon.” 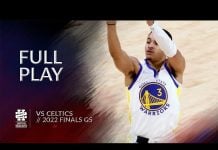