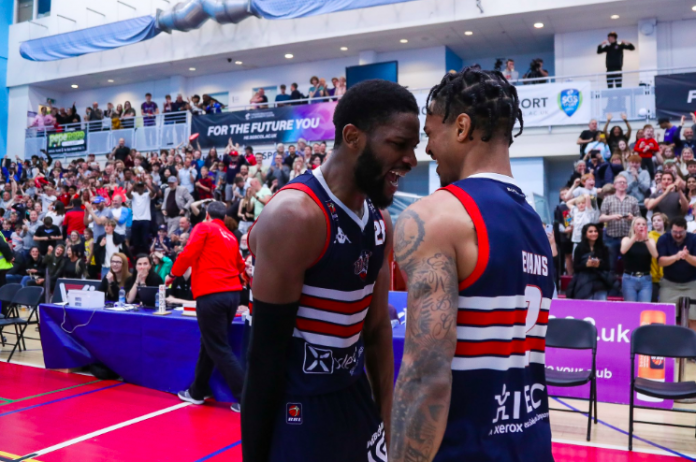 Trailing 91-79 from the first leg on Thursday, Flyers erased the Giants aggregate lead in the second period. But Manchester, who trailed for the majority of the second leg kept battling away and maintaining their overall lead.

Then with the game on the line, Bristol’s Mike Miller calmly drained a turnaround jumper, before Malcolm Delpeche blocked Tyrik Armstrong’s lay-up attempt with a second left that could have taken the game to overtime but instead handed Bristol a 94-80 win on the night and a 173-171 win over the two legs.

“On Thursday our mentality was simply to win the game, we didn’t do that but we believed in ourselves heading into the second leg,” Flyers coach Andreas Kapoulas said.

“We didn’t have to talk much about it. We knew we had to take it possession by possession and when there is an opportunity, you take it, and we did that when our time came.

“In the end, these guys are professionals, they train so hard to make big plays and we needed two of them to get the job done. Mike Miller was huge for us. He went off at the right time and Malcolm [Delpeche] was in the right place to make that big defensive play for us.”

Miller led all scorers with 33 points for the Flyers with Martaveous McKnight battling for his 30 points for Manchester, who despite the heartbreak can be proud of a season that saw them reach their first domestic final since their rebirth in 2012 and playoff appearance since 2014.

Seventh-seeded Glasgow Rocks also came from behind in their two-legged series as they defeated league runners-up Sheffield Sharks 96-72 on the road, overcoming an 83-76 first leg loss in Scotland to win 172-155 overall.

With Rocks leading 70-65 on the night but trailing by two points on aggregate, like Bristol-Sheffield the night before, it was all set for an interesting, grandstand finish.

What happened instead was Glasgow taking the lead overall with the first offence and never look back as the Sharks could only muster seven points in the fourth.

Jordan Harris led all scorers with 21 points for the Rocks.

In a rematch of the BBL Trophy final, Cheshire Phoenix (6) nearly pulled off the greatest comeback of them all in their playoff quarter-final tie against the London Lions (3).

But a strong second half ensured that London advanced to the semi-finals as they lost 97-95 in the second leg but won 180-166 on aggregate.

Leading 85-69 from the first leg in the capital, the Phoenix raced out of the blocks, leading 67-38 at half-time against a Lions side seemingly out of ideas.

However, a Lions team stacked with talent responded in the third and fourth quarters to end Cheshire’s hopes

League champions Leicester Riders (1) comfortably overcame Plymouth City Patriots (8) as they backed up their 86-71 win on Friday with a narrow 88-87 success, 48 hours later.

Despite advancing, Plymouth will hold their heads up high. Competing and achieving what they have done, having faced an off-season of uncertainty with the previous owners pulling the franchise out during the summer and a new team being built from scratch with a month or so before the BBL season even began.