Numerous teams within the association are keeping their eyes watching on the probable ending of Donovan Mitchell’s tenure with the Utah Jazz.

ESPN’s Tim MacMahon reported on Friday that there are multiple ball clubs who are “anxiously waiting” and have been “planning and plotting” on Mitchell’s possible desire to announce his intentions to leave the franchise this offseason.

Multiple teams are anxiously awaiting the answer, league sources say, and have been planning and plotting for months in anticipation of the three-time All-Star asking to be traded as soon as this offseason. Mitchell was noncommittal when asked about the possibility in the wake of elimination.

Mitchell and the Jazz’ 2021-2022 season has come to an end in a first-round brilliance of their opponent in the Dallas Mavericks via six games. Yet again, they underperformed and crumbled to clinch a much deeper playoff run – a goal that they haven’t achieved yet on their side upon entering the playoffs for six-consecutive seasons dating back from 2016-2017.

When asked about his future in Utah after the painful Game 6, Mitchell provided a weightful response that needs to be noted.

“My mindset is to win. Like I said, right now, I’m not really looking at [asking for a trade],” Mitchell said. “For me, I just want to win.”

“This hurts. Like I said, I’ll think about it in a week and go from there, but right now, I’m not really thinking about any of that.”

In addition to winning being a concern, Mitchell’s relationship with co-franchise face Rudy Gobert has been a hot topic of discussion that contributes to the departure narrative. Speculations remain swirling that the two have an ongoing rift.

As such, both Mitchell and the Jazz are bound to reach a summer filled by anticipated changes. With a lot of drama, murmurs, and questioning going on, the Utah leadership will certainly have a one, busy break of deciding if they’ll retool or pull the trigger towards a major rebuild. 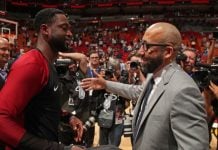