The veteran joins the French LNB side, who are currently sitting in third spot with a 17-7 record.

The 31-year-old, Los Angeles-born guard moves back to Europe from China where he spent three years with Shandong Lions.

Before his move to Asia, Jeter enjoyed spells in Spain, Israel and in the Ukraine, where he plays for the national side.

In his first international tournament, Jeter led Ukraine to a deserved sixth place at Eurobasket 2013, where they qualified for the 2014 FIBA World Cup.

Ukraine were eliminated in the group stages of the tournament in Bilbao, but Jeter impressed, averaging 15.4 points a game.

Jeter in action vs USA:

Even if the war ends soon, not everything is suddenly going back to normal 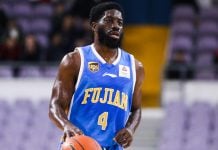 Monaco, Limoges and Nanterre to reportedly play in the 2019/20 EuroCup

Canadian Basketball Teams That Are Sponsored By Online Casinos