Within the room of professional cagers hoping for a brand-new or another stint in the NBA, Quinn Cook is absolutely praying that one of the 30 teams will knock the door to plead for his service.

It was a heck of a ride for him after over a year out of the league, and making his way back again in the basketball’s most premiere stage will be the ultimate thing to cherish for.

Cook penned down a touching Twitter post on Monday, expressing his thoughtful wishes that he’ll get a notice again to play in the NBA after going through a couple of months wherein he claimed he was at the “rock bottom” of his life.

After a decorated college career representing the Duke Blue Devils, Cook went undrafted in the NBA in 2015 and hopped through different teams for temporary playing opportunities. It was in 2017-2018 season that he acquired his best opportunity from the Golden State Warriors to showcase his talents, helping them to reach two-straight NBA Finals and claim an NBA championship with his serviceable showings off the bench. Prior to the 2019-2020 campaign, he inked a contract with his hometown team Los Angeles Lakers and went on to win the coveted title within the NBA Bubble.

Yet, last year was a downing year for the 29-year-old guard, as he was waived off by the Lakers and then proceeded to sign two-straight 10-day deals with the Cleveland Cavaliers. Since then, he wasn’t able to last long in the league.

After being waived off last October by the Portland Trail Blazers following two preseason games, Cook explored the overseas and signed with Russian ball club Lokomotiv Kuban of the VTB United League. It was in December 28 that he parted ways with them after averaging 5.5 points, 2.7 assists and one rebound in six games.

Thankfully enough, he accepted an offer to suit up in the G League for the Stockton Kings. Perhaps it was a great stepping stone to make a return, but no teams yet have reached out to him for a possible partnership.

Whether if he goes being signed for a secured contract or not before the curtain of 2021-22 regular season drops, Cook is indeed brave and inspiring enough for delivering his determination to make it back in the NBA after the personal challenges he endured from the past few months. Still at a young age and offensively ready, he is capable enough to offer reliable spark off the bench with his skills and scoring bag. 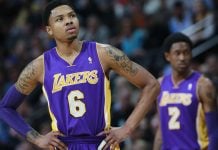