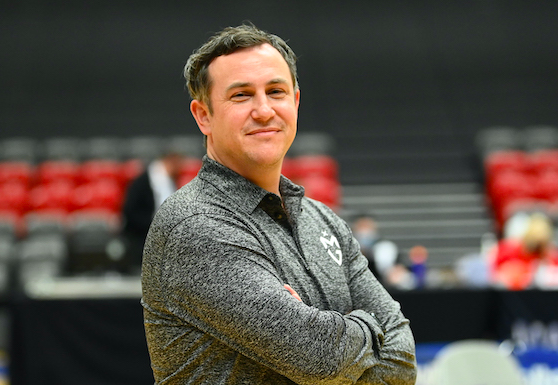 After missing out when Manchester travelled down to the London Lions due to Gardner entering covid health and safety protocols, Sunday’s trip to the midlands will see the playcaller reunited, face-to-face with his London-based family at long last.

It’s a reminder of how difficult professional basketball can be, off the court and Gardner isn’t shy about explaining it.

After years being close to home and coaching at Barking Abbey in East London to living in completely new surroundings up in the north-west, Gardner says that while he loves the job and the situation he is in, he is still finding that comfort zone.

A big part of that missing piece is the absence of his family. And while he admits that he talks to his family on FaceTime almost every day, nothing compares to that magical face-to-face interaction.

“It’s hard, off the court,” Gardner explains. “I would say that I have a comfort zone being in London and the surrounding areas and that’s my reputation with a lot of the younger players around Barking Abbey.

“Moving up here though, mainly for the personal side of things as well with me moving and the hardest of all for me is that my family are still in London.

“I have twins and while they are at school, I don’t particularly want to move them out of their comfort zone. So the personal life is much more harder to juggle than the basketball side of things where you turn up, build a rapport with the players and that’s fun, but off the court, I can’t deny it, it’s been hard.”

While the emotions will run high when he gets to give his kids and partner a much-needed hug, Gardner will need to keep his feelings in check when his Giants prepare for their first BBL Cup final against the Leicester Riders.

“We know of the talent that Leicester have and they have a number of weapons at both ends of the floor,” says Gardner.

“For us, it’s about playing to our strengths on the day. We have won games, which is great and we have reached goals that we have met plus we have started the season well.

“So we are where we want to be and we are pleased with what we have achieved so far.”

Since the team’s rebirth in 2012, Manchester have been yet to trouble the leading teams in the BBL until this season.

Currently sitting in second, only looking up at the Riders, the Giants are enjoying their best start to the season with Gardner at the helm, this despite heading to the BBL Cup final on the back of back-to-back losses.

Boasting a strong British core, led by Great Britain captain Dan Clark and a talented trio of imports, fronted by the team’s leading scorer Tyrik Armstrong (16.4ppg), Gardner admits that he has headaches with regards to sharing the minutes out, but that’s a good thing.

“I’ve heard some figures around the BBL saying that we have assembled perhaps the deepest roster in the league, but in honesty, that’s the job of any coach really,” Gardner explains.

“We’ve had our share of issues this season, mainly due to covid, but I have been proud of how professional we have been and how we have continued to fight for results and fight for continuous improvement within our squad.

“And that has been the reason that we are in this final. We have fought to get here and these guys deserve it.”

With his family by his side, those emotions might be too much for Gardner and the Giants if they are victorious at the final buzzer.

And, would you blame him?

The BBL Cup final takes place on Sunday, 30 January at the Utilia Arena in Birmingham.