As the season gets deeper, issues are getting more complicated on the side of the Houston Rockets. After developing high hopes at the start, the red nation continues to crash hard now at the rock bottom of the NBA’s pit of mediocrity — a disappointing sight for a roster that is filled by promising cagers.

The clamor of Rockets fans for John Wall to finally suit up the team’s uniform gets louder and louder in these times of disappointment — as they believe that the former All-star can turn the tables around and be an impactful on-court presence for the talented young guns. Yet, it seems to be that the mutual decision between Wall and the management before the 2021-2022 campaign cannot be overturned — wherein the point man agreed to be shelved until a new home will be found for him.

As Wall continues to sit while trying to be patient upon waiting for a possible transaction, he has time to agree with Sports Illustrated’s Chris Mannix’ in a reason on why he remains being “punished” to be placed in an inactive status for on-court activities — a reason that he cannot fully control.

It seems to be that as much as Wall wanted to play and participate, he cannot do it — as many teams are being reluctant to commit a risk to acquire him. Things like durability and even that hefty contract he has remain as tagged concerns in his name. Even buyout remains out of the choices on part of Rockets GM Rafael Stone. Wall has no other choice. If ever he demands to don a red gear to at least guide the talented squad, it’ll be a good move for both sides.

Time will tell what will unfold in the future between Wall and the Rockets. As such, it will be even more interesting to see how Houston will deal with the unfortunate moments that they are associated with — to look for the silver lining that is directed to both Jalen Green and Alperen Sengun.

The Rockets will head back home to face the Eastern Conference powerhouse Chicago Bulls on Wednesday. 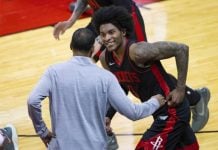