A standout shooting guard who was a consensus five-star recruit out of Louisiana State University, Cam Thomas is a legitimate bucket-getter and offensive wonder at age 20. Seeing him fall under the lap of the juggernaut Brooklyn Nets on their 27th pick of the NBA Draft is hugely a criminal act of negligence amongst the other 29 teams in the league.

Though playing in only 10 games and receiving minimal playing time, no one can still deny how special he is. As the first-year man helped the Nets to clinch the 117-112 close road victory over the Cleveland Cavaliers on Monday night, he received nothing but love and acknowledgement from his established teammates like Kevin Durant and head coach Steve Nash.

Durant told reporters that Thomas, who had an impactful 11 markers, was huge for the team and they entirely need him moving forward because of its potential.

“It’s good to see a young dude like Cam [Thomas] into it like that — I’m going to be on him even more now,” Durant said. “He gave us that spark we needed — We need him to build on this because he has a bright future.”

Veteran LaMarcus Aldridge has similar thoughts in his mind, saying that the rookie was a good pick up for the squad.

“He was a big pick up for us,” the 35-year-old big man plainly provided but with an obvious resounding context.

Meanwhile, sophomore tactician Nash also gave his own positive remark about Thomas, saying that he was proud of the output it gave down the stretch in a tight contest against the Cavs.

“It’s nice to have options — He [Cam Thomas] definitely made progress tonight,” Nash stated in the media. “He stepped up with confidence — Made some big shots for us … I was proud of him tonight.”

Cam appreciates all the commendation, but he is certainly humbled and thankful for having a chance to showcase his worth in a loaded Nets team.

“Tonight I just wanted an opportunity to have a chance.”

Thomas’s presence was felt in the third quarter wherein Brooklyn was down by 12. He took over and became a trustworthy pick off the bench by Nash, carving up eight markers in the 20-6 blaze by the Nets in which they entered the fourth period with a two-point margin.

Thomas is truly a gem on the part of the Nets’ future with that terrific feel for the game and confidence in abilities, and his recent explosion in G League prior to the Cleveland match just proves how lethal he is.

Thomas’ scorching hands will be needed in the Nets’ visit in Boston for a battle against the Celtics on Wednesday. 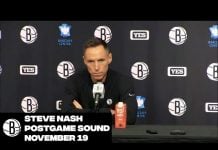 Russell Westbrook had his best game with the Lakers, according to...