Slovenian international Goran Dragic has been traded to the Miami Heat.

That deal gave the Pelicans a fill-in for the injured Jrue Holiday and the Heat some depth. Both players will be free agents at the end of the season.

Dragic who averages 16.2 points, 4.1 assists and 3.6 rebounds this season would have been a free agent in July and is drew interest from Houston Rockets, Boston Celtics and Sacramento Kings.

The 28-year-old’s current points and assists though are down considerably from last season, when he was named third-team All-NBA.

He said he doesn’t like his role of “standing in the corner” and wants to go to a team where he can “be a point guard, like in the past I was my whole life.”

“To be a point guard, to run the team and have the ball in my hands and try to make plays for others,” Dragic said. “That’s who I am.”

He often found himself playing the off guard or on the wing in deference to the Suns’ other point guards, Eric Bledsoe and Isaiah Thomas. Sometimes all three were on the court together. Something that has not suited the Slovenian.

“Last year was great. This year it’s different,” Dragic said. “… Standing in the corner, it’s not my game.” 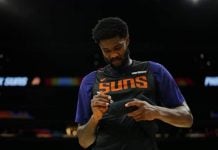