Kevin Garnett is honored for his name to be engraved in the Boston Celtics’ history books.

But for not receiving the flowers he deserves from the Minnesota Timberwolves? He may seem to have an “all good” expression, nevertheless.

Guesting in the Jimmy Kimmel Live!, the all-time great power forward was asked about his thoughts regarding his jersey being retired soon by the Cs, and haven’t yet by the T-Wolves. Garnett just answered bluntly, pertaining only to the glorious commitment and actions of the green franchise in winning.

“If you know anything about the Boston Celtics, they’re known for their championships and the way they do things. They do things in the championship way, and that’s what I’m going to say,” Garnett said.

But, Garnett clarified that he truly loves Minneapolis and he will just let someone handle the franchise to do their things.

“But I love the city of Minneapolis and I am not here to crap on anything — someone has a franchise and the way they want to run their franchise is up to them.”

Garnett’s #5 will be raised in the rafters of the TD Garden on March 13 next year, becoming the 24th player to be recognized as part of the rich history of Beantown basketball. He spent six fruitful seasons in Boston and molded a ‘Big 3’ with Paul Pierce and Ray Allen in 2007 offseason — helping the Cs clinch its 17th title after crushing the arch nemesis Los Angeles Lakers in Game 6 of the 2008 NBA Finals.

Though considered by many as the greatest ever to represent Minnesota in American pro sports, the Timberwolves franchise hasn’t retired Garnett’s jersey yet. It is heavily documented that the Hall of Famer and the former team owner, Glen Taylor, have a complicated relationship and ongoing rift that is too much to handle. In an interview with Shams Charania of The Athletic last year, Garnett made it clear that he is not interested in his name being acknowledged by the organization because of Taylor, whom he called a “snake” after the poor tribute it gave on the death of his beloved head coach Flip Saunders and making him believe he’ll run the front office of the squad after his 2016 retirement.

On March 21 this year, Garnett announced via his Instagram story that he will not buy the Timberwolves franchise anymore, delivering his shots against Taylor. Meanwhile, the businessman dismissed the claims of the former player and told The Athletic’s Jon Krawcynzski that KG didn’t reach out to him in discussing a transaction.

For now, Garnett is receiving uplifting support in his Showtime documentary “Anything is possible”. Time will tell if Minnesota will give its former centerpiece a heartwarming gesture of ceremony in the future. 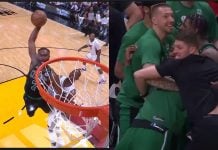 Ime Udoka: “I think the mental stress and strain we put on some teams with our defense has worked and carried us through the...