Washington Wizards star Bradley Beal currently faces life and basketball with a heavy heart after the recent loss of his grandmother.

According to Beal, he received the news after they landed in Cleveland for a duel against the Cavaliers. He was weighing his decision to play or not the following day.

Beal ultimately decided to suit up for D.C and only told his concern on a few key names of the franchise, like head coach Wes Unseld Jr. and general manager Tommy Sheppard.

The 28-year-old then noticed that his teammates were noting his saddening emotions during the game time.

“Eventually, guys were seeing it on my face. I was wearing it all night. I couldn’t hide it,” Beal said.

“Because when I played basketball, she watched me. She watches me. She came to my games, she was physically there. Now that can’t happen anymore. That’s tough.”

But in spite of that, the guard didn’t reveal then the sorrowful thing he was mourning, as he chose to live up on the advice of his ‘mother 2.0’ to become a team player who prioritizes the collective entity of all.

“As hard as it was tonight, that’s what she wanted. So, hopefully she’s proud.”

The Wizards went on to outlast the Cavs in a nail-biter, 97-94, as Beal located Kyle Kuzma in the corner, who hitted the crucial three-point shot to lift the team for an 8-3 record, good for the no. 1 seed so far and tied with the Chicago Bulls in the highly-competitive Eastern Conference.

“They won this game. I wasn’t in it mentally, physically, emotionally. My teammates won this game in every shape and fashion,” Beal claimed.

As the Washington squad finally understood the circumstances that Beal is dealing with postgame, they showed their heartwarming support to their leader, especially big man Montrezl Harrell who also painfully lost his beloved grandmother in 2020.

“All we could do was be there for him. That’s what I kept telling him every time we came up the floor, I said ‘I’m with you,'” Harrell said.

The Wizards are poised to ride from their hot start, and will visit Orlando for a season faceoff against the Magic on Saturday. 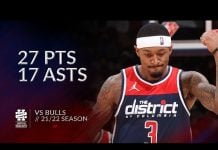 Victor Oladipo could reportedly return sometime in February for the Miami...