Steph Curry had an astonishing night in the season opener win over the Los Angeles Lakers Tuesday. The Warriors recorded the first win over their conference opponent.

They got 20 points from Jordan Poole, 15 from Nemanja Bjelica, 15 from Damion Lee, and 12 from Andre Iguodala, showing their ability to take advantage of their depth.

“It’s a good confidence-builder knowing we came in and got the job done,” Curry told reporters after the game, via NBC Sports Bay Area.

“Everybody contributed, and we’re starting to develop an understanding of offensively how we are going to create shots. We moved the ball, weathered the storm during the third quarter, went on a little run, kept our composure.

“We didn’t turn the ball over in the second half which was a huge benefit to just maintaining the pace and giving ourselves some looks.

But the fact that everybody who was on the floor contributed in a meaningful way kind of speaks to the depth and how we want to play going forward. So I’m excited about that. It’s good to be 1-0.”

Curry finished the contest with 21 points, 10 rebounds, and 10 assists to lead the Warriors to the first win of the season. Expectations are higher for the Warriors, especially if Klay Thompson and James Wiseman return healthy at some point this season. 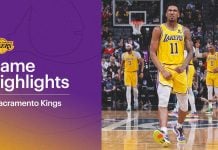 Robert Horry on what impressed him most from Lakers in win vs. Kings

Shannon Sharpe on Lakers win over Kings: “This told me they can play defense when they want to”