Olimpia Milano is one of the two teams that remains unbeaten in the EuroLeague, with four wins in the first four rounds of the regular season.

Milan has been an excellent example of a team winning by committee, with just two players scoring in low double-digit averages.

Ettore Messina’s squad has an excellent ability to create in offense, being top-5 in points production with 80.0 per game through four EuroLeague contests and one of the best in assists average (18.2, 5th).

Olimpia’s image in advanced statistical numbers is also great, as Messina’s players are averaging an excellent 113.5 points per 100 possessions, per EuroLeague advanced stats.

The Italian club’s offense is based on their ability to hit 40 percent of its shot from three-point range, attempting 111 threes in the first four rounds of the EuroLeague, which ranks them second in the competition.

The top scorer for Olimpia is Devon Hall, who had double-digits totals in points in his first four EuroLeague games of his career. The Virginia product is averaging 13.3 points, 1.5 rebounds and 1.0 assists per contest.

He is followed by Shavon Shields, who started the season in a high-note, hitting his threes on a 40 percent clip and his two-pointers at almost a 52 percent clip. He registers 12.0 points, 6.0 rebounds and 3.3 assists in four contests.

Furthermore, Milan’s rim-running duo of Kyle Hines and Dinos Mitoglou found their chemistry together, destroying the opposite front lines with their versatility, their rebounding and their energy.

In the latest game vs. the reigning EuroLeague champions Efes on Friday, the two bigs combined for 17 points, 13 rebounds and eight assists. They also had four steals, just two turnovers and a combined 30 in index rating.

The last part of the starting-five puzzle is completed by Nicolo Melli, who returned to Europe this offseason. The veteran forward helps Milan by stretching the floor and offering secondary playmaking.

Melli is the final piece of a well-oiled machine, offering veteran leadership and rotational minutes alongside Luigi Datome at the forward position.

Despite being early in the season, Milan seems already an improved team and that’s scary for the rest of the competition, considering the team was one shot away from making the EuroLeague Final last season.

If the team remains healthy for most of the season, then Olimpia has the chance to achieve great things this year. 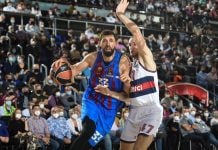 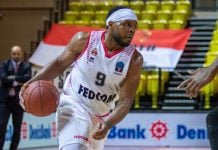 FC Bayern Munich hopes to get upper hand in first EuroLeague matchup vs. AS Monaco

Six Lakers players out vs the Bucks on Wednesday

Do you think Melo has a legit shot at winning Sixth...

Melo, AD & Russ went up to Eubanks after that almost...

Raptors’ VanVleet fined by NBA after a Sam Cassell gesture vs....