The Golden State Warriors player Andrew Wiggins says he felt like the NBA and the government “forced” him into getting the shots, via TMZ Sports:

“The only options were to get vaccinated or not play in the NBA. It was a tough decision. Hopefully, it works out in the long run and in 10 years I’m still healthy,” Wiggins said after Golden State’s preseason game Monday night.

“It’s not something I wanted to do. But I was kind of forced to.” 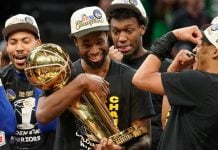 Andrew Wiggins express intentions to remain in Bay Area: ‘I would love to stay here’