EasyCredit BBL is two games in and several players made noise in the first two rounds of the German BBL. Most of the players in the list made a strong statement as the Basketball Bundesliga began last week.

Here are players that could be a ‘must watch’ this season:

Caleb Homesley will experience his first taste of overseas basketball this year, after spending last season in the G League with Erie Bayhawks.

Homesley signed a 10-day contract with the Washington Wizards, but, he did not have the chance to make the team, as the Wizards had a pretty deep guard rotation.

Washington gave him the chance to show his skill in the Las Vegas Summer League, where he played four games, averaging 12.0 points, 4.7 rebounds and 2.2 assists per.

That was enough for the shooting guard to earn a contract in the German Bundesliga with Hamburg Towers. The 24-year-old guard has been excellent for Pedro Calles, despite Hamburg’s slow start in the league.

In his two games in the easyCredit BBL, Homesley showed off his scoring ability as he shot 40 percent from three-point range and 40 percent from the field. He averages 18.5 points, attempting 17 field goals per contest.

If Homesley establish his role as the ‘go-to-guy’ in Hamburg, then it would be a huge asset for his team, as his scoring ability and size for the shooting guard position is hard to find around the league.

MLP Academics Heidelberg made a surprise start in the German BBL, as they are at the top of the standings with two wins in the first two rounds.

Jordan Geist has been a huge part of the team during the first two games, with his latest excellent game coming against Ludwingsburg, finishing an all-around performance with 23 points (career-best), seven rebounds and four assists.

Geist spent four years in Missouri, before making the jump to the German Pro A League with Trier. Heidelberg signed him during the 2020 offseason, and Geist became a huge part of the team’s success that ended up securing a place in the German top-tier league this season.

Geist is coming off a year, where he averaged 15.3 points, shooting 39.4 percent from deep and an excellent 48.9 percent in two-pointers.

He made a strong start in his first two appearances in the easyCredit BBL, putting up 18 points, 7.5 rebounds and 3.0 assists per, while shooting 36 percent from the field and 33 percent from the three-point line.

While, Christon seemed a safe bet, after showing his ability with Tofas and EuroLeague regulars Baskonia, Felicio is making his first attempt to play overseas this year.

The former Bulls’ big spent six years of his career in Chicago, before making the jump to Ulm. He started his ‘European adventure’ on a great note, as he averages 15 points, 8.0 rebounds and 2.0 blocks.

His best game so far came in the Ulm’s defeat from Niners Chemnitz in the German Cup, where he put up an impressive double-double of 15 points and 14 rebounds.

While he also had an impressive debut against the German Cup winners Bayern Munich with 18 points and seven rebounds in the opening game of the easyCredit BBL.

ALBA Berlin signed Israeli promising forward Yovel Zoosman to replace Rokas Giedraitis, who left for Baskonia during this past offseason.

Zoozman was considered a huge talent for Maccabi Tel Aviv, and he was the 2020 Defensive Player of the Year in the Winners League.

Despite, his strong presence for Maccabi, and his attempt to make the jump to the NBA, Zoosman remained in European soil, signing a deal with German BBL title holders.

The 23-year-old forward has shown his ability to impact the game in both sides of the floor with ALBA, putting up 11.0 points, 3.0 rebounds, 1.5 assists and 1.0 steal in the first two games of the German BBL.

Zoosman will have the chance to adapt to a different role in Berlin, as Israel Gonzalez could demand more production from him in the offensive side of the court.

So far, the promising forward has been taking fewer shots in ALBA’s offence; however, he remains effective by shooting 60 percent from the field on 7.5 attempts per contest.

If ALBA find a way to take advantage of Zoosman’s size and make him more active in the offensive side, the Israeli forward could in the trajectory to have a breakout year in Germany.

Parker Jackson-Cartwright have the chance to shine in a bigger stage, playing for Telecom Baskets Bonn this season. The Arizona product is coming off a great year with San Quentin in the second-tier league of France.

He was named the 2021 LNB Pro B Most Valuable Player after averaging 15.4 points, 3.2 rebounds, and 7.2 assists per game. He made his debut with Bonn against ALBA Berlin leading the ‘Rhinelanders’ to the win.

He followed his incredible performance with another all-around game against another German BBL powerhouse, the ambitious Ratiopharm Ulm. He finished the contest with 16 points, 5 assists, four rebounds and two steals.

Despite his height (1.80 cm), Jackson is pretty active in both ends of the floor, as he finds ways to change the course of the game in both defence and offence.

Bonn may have found a diamond in the rough for head coach Tuomas Ilsalo, who led his team to two huge wins for a perfect 2-0 at the start of the easyCredit BBL.

Chris Coffey has made his presence felt from the start in the Basketball Budesliga, showcasing his incredible athleticism, his ability to be an effective roll-man, and his raw low-post skills.

The former Georgetown product and NCAA champion made an incredible debut with Syntainics MBC, with 31 points, eight rebounds, two assists and two steals in MBC’s 101-106 win over Basketball Löwen Braunschweig.

Coffey spent the first season in Europe with Ventspills, where he put up 12.9 points, 8.6 rebounds and 1.8 assists in 26 appearances with the Latvian club.

The 2019 NCAA champion made the jump to the easyCredit BBL this year. Syntainics MBC started with an 1-1 record in the first two games of the German league, with Coffey being a centrepiece in coach Jovovic’s plan.

The undersized (2.01 cm) center has the potential to shine in Germany, as the easyCredit BBL is known for producing players like Kyle Hines, who became one of the best ‘small’ bigs in Europe.

Coffey could follow Hines and model his game after the Olimpia Milano’s veteran center. In his career-high performance vs. Braunschweig, the Louisville native showcased his ability to put the ball on the floor and attack the basket. 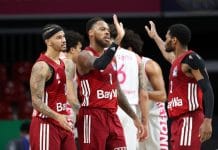