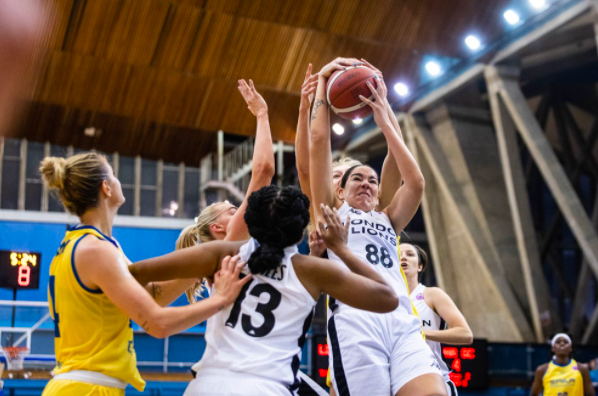 London Lions’ qualification into the EuroCup Women regular season wasn’t just a win for the club, the team also promoted the growth of the Women’s British Basketball League.

On the court, the level of talent, individual skill, team chemistry and will to succeed in the WBBL is continuously improving with players ranging from established Great Britain internationals, top American college players and former Olympians coming to play in the league.

Last Thursday’s EuroCup Women qualifier, first leg in the British capital between the Lions and Gran Canaria showcased the WBBL’s strengths in the shape of a well-organised London outfit that took control and never relented.

It started with defence. The Lionesses held their Spanish counterparts to less than 50 points, along with scoring threat Maya Caldwell being contained to 16 points on 6/22 shooting, eight of those coming towards the end of the contest.

Then to complete the marvellous performance … suffocating defence, translated into sublime offence.

Former GB junior Holly Winterburn, who once played a season with New York Liberty standout Sabrina Ionescu at Oregon, led with 22 points and looked settled in her home having spent last term with the Leicester Riders.

Not to be outdone, floor general Kennedy Leonard added 14 points, seven assists and five steals in an outstanding showing, fitting of her accolades from her last campaign, which included the country’s Women’s Player of the Year, voted by the Basketball Journalists Association.

As a team, London Lions shot 45 percent from the field, making 12 of their 17 free throws and stopping Gran Canaria from getting into any flow, highlighted by their subpar 23 percent shooting night.

It was poetry in motion. The team chemistry was for the majority of the contest, flawless. The 76-46 win, thoroughly deserved.

A 30-point cushion heading into the second leg tonight [Thursday], it was safe to say that Lions were overwhelming favourites to see out the tie.

But they had to show composure and professionalism under intense pressure in Gran Canaria as the hosts were always going to be a different outfit to the one that was dispatched of so comfortably last week.

As expected, the Spanish side shot the ball well, forcing London into contested and forced shots, as well as limiting the distribution of WBBL season assists leader, Leonard, who was held to zero assists.

It was almost a role reversal from the first leg, with one difference: London were able to withstand Gran Canaria’s scoring runs and put an end to them quickly, something that the Liga Femenina side couldn’t pull off a week earlier.

Gran Canaria claimed the second leg, 67-56 but the 132-113 aggregate win for the Lions was a landmark statement for them and for the women’s league in Great Britain.

Winterburn, once more led the way with 16 points, Shanice Norton added 15 for the Lions.

Job done. And now, it’s time to build on this, from a marketing standpoint.

This is the WBBL’s chance to shine. London Lions are doing it in Europe and the basketball fraternity wants to know more about the female ballers from Britain.