Phoenix Suns are going to face a healthy West in the upcoming season, so it will be tough for them to reach the NBA Finals again, according to former NBA players Matt Barnes and Richard Jefferson.

The Suns lost in six games to the Milwaukee Bucks in the 2021 NBA Finals, with fans being optimistic that they could replicate their run this season.

Barnes expressed his belief that the Suns won’t make it out of the Western Conference despite the presence of Chris Paul and Devin Booker.

The Suns faced the Lakers without Anthony Davis, while they played against a Clippers’ team, which didn’t have Kawhi Leonard available.

That does not take away from the fact that Phoenix made the Finals thanks to Devin Booker, Chris Paul and DeAndre ayton, who had incredible games to lead their team to the Finals. 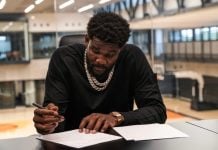