Yesterday a report appeared that ESPN is terminating its relationship with a long time employee Rachel Nichols. She later confirmed the report via a tweet. Allegedly, Nichols was fired due to her comments on her colleague Maria Taylor that were secretly recorded and later made public. During the recorded conversation Nichols complained that ESPN gave her job to Taylor due to the networks diversity policies.

Sports commentator Clay Travis gave his take on the news of Nichols’ departure from ESPN. “What this represents to me is ESPN further following in the footsteps of the woke universe,” he said on OutKick. “Rachel Nichols for years lectured everyone, as ESPN employees covering the NBA are required to do, about the woke bona fides of the NBA. Even as the NBA’s overall ratings collapsed, Rachel Nichols made the decision to defend the NBA and all of the woke idiocy that that league embrace.

“In fact, she lectured America on how brave the NBA was when they pulled their All-Star game out of Charlotte, North Carolina over a bathroom bill that was alleged to target transgender individuals even while the NBA continued to play basketball all around the world in countries such as China which have repressive human rights regimes. That hypocrisy was never addressed, it was never analyzed. And this is where people who embrace wokeism ultimately go. You are at some point in time going to be cancelled if you are not woke enough and you work in sports. You have two options — say nothing or get fired.” 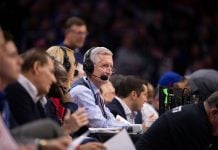