The remaining four teams battled for a medal in Tokyo, as the 2020 Olympics wrapped up over the weekend.

Team USA’s journey to a gold medal in Tokyo didn’t start out the way they wanted, as the club went 2-2 during exhibition games in Las Vegas and lost to France in their Olympic opener. But from there, Gregg Popovich’s group dug in on defense and scored the ball at a high level in an undefeated run the rest of the way. USA was able to come up with a 4th straight gold medal led by new all-time United States Olympic leading scorer Kevin Durant and his amazing offensive ability.

Solid defensive efforts from Jrue Holiday, Bam Adebayo, and Draymond Green helped the Americans reach the gold medal game to redeem themselves against France. Durant went for 29 points in the title game, but it was going to take more than just a breakout game from KD to bring home gold, as Jayson Tatum stepped up with 19 points off the bench. After losing their first group play game out in Tokyo, Team USA could have easily panicked, but the group stuck to their principles and beat every team they played by double digits until a hard fought 5 point gold medal matchup win vs. France.

The French national team couldn’t have started their Olympic run any better, as Evan Fournier’s 28 points helped the club defeat #1 ranked USA in the first game of group play. France ended up easily defeating Czech Republic and Iran to finish 3-0 in the preliminary round, but then had two tough matchups ahead of them in Italy and Slovenia. Rudy Gobert’s 22 points & 9 rebounds overpowered the Italians which then followed a game-saving block by Nic Batum in the semi-finals vs. Slovenia.

Timely plays on both ends by Nando de Colo and Guerschon Yabusele also played a big part in France’s journey to the gold medal game, as the French starters displayed great balance from all five guys. Although, in the title game, USA’s all star talent made the difference and the Frenchmen lost by single digits to earn themselves the silver medal. Over the last two years, the French national team continues to stand out on the world stage, finishing 3rd at the 2019 FIBA World Cup and now taking home the silver medal at the 2020 Tokyo Olympics.

Australia’s three point shooting and ball movement guided the veteran club to a 3-0 record in group play, led by new Brooklyn Net Patty Mills. Their high powered offense looked to be a serious threat for USA after defeating Argentina by 38 points in the quarter-finals, but not having many versatile defenders with size besides Matisse Thybulle eventually caught up to Australia, resulting in a double digit loss. However, the Boomers remained optimistic, knowing they still had a chance at winning their first ever Olympic medal in men’s basketball.

Mills would go on to score 42 points and dish out 9 assists in the bronze medal game vs. Slovenia in an impressive win to end the Olympics. Even though Australia was able to earn a medal, defense was a major need in their only Olympic loss to the United States, which makes you think about what kind of difference 2x All NBA Defensive First Team member Ben Simmons would have made for his home country out in Tokyo.

Luka Doncic & Slovenia hit the ground running in the Olympic qualifying tournament, putting up 106 PPG in dominating fashion to help reach the 2020 Olympics. The group wouldn’t slow down when they arrived in Tokyo either, as the high scoring outings continued to result in wins, finishing with a 3-0 record in the preliminary round. Doncic averaged 23.8 PPG/9.7 RPG/9.5 APG for the tournament, but other Slovenian players like Zoran Dragic, Vlatko Cancar, Klemen Prepelic, and Mike Tobey most definitely deserve their credit.

Unfortunately for Slovenia, their successful first Olympic appearance would end in losses to experienced teams in France and Australia, coming up just short of a medal by finishing 4th in Tokyo. Despite not winning a medal, the future for Slovenian basketball is in great hands led by 22-year-old NBA superstar Luka Doncic, who has plenty of international basketball ahead of him. For a country that consists of just over 2 million people, finishing 4th at the Olympics is certainly a major accomplishment. 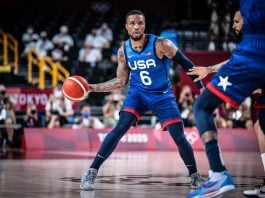 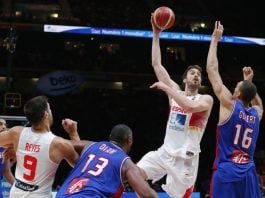