The NBA was extremely happy to have their draft night back in person this year.

Let’s take a look at how the 2021 NBA draft went down on Thursday in the lottery.

With many rumors throughout the year all pointing to Cade Cunningham (Detroit Pistons), Jalen Green (Houston Rockets), and Evan Mobley (Cleveland Cavaliers) going in the top 3, the speculation turned out to be true and the three rookie stars went in that order.

Picks #4 and #5 is where the draft started to get interesting. During the pre-draft process, Jalen Suggs and Scottie Barnes were heavy favorites to go 4 and 5 to the Toronto Raptors and Orlando Magic, but Barnes continued to leave impressive marks on teams at his workouts and ended up going 4th. Suggs wouldn’t slide far though, being taken next at 5 by the Orlando Magic.

Selection #6 was a big surprise for the Oklahoma City Thunder, as they went with Josh Giddey. James Bouknight was rumored to be their guy at 6 a few weeks back, but Giddey’s stock kept improving leading up to Thursday night.

Next up at #7, the Golden State Warriors selected Jonathan Kuminga, a name many thought would be a top 5 pick. Kuminga took in NBA experience at the G League with Jalen Green last season and now gets to learn from names like Stephen Curry, Klay Thompson and Draymond Green.

Ziaire Williams was rumored to have strong interest from the Orlando Magic at #8, but Orlando went with Franz Wagner, who the Sacramento Kings liked next at 9. Wagner’s older brother Moritz played solid basketball at the end of the season for Orlando, which may have sparked additional interest for Franz.

With Wagner gone at 8, Sacramento decided to pick Davion Mitchell with the 9th selection. For a team lacking defense, Mitchell brings a lot of what they need on that side of the ball.

At #10, Josh Giddey was rumored to go to the Grizzlies in most mock drafts, but he went earlier than expected and the club picked a versatile player they are also high on in Ziaire Williams. Memphis moved up from 17 to 10 in order to get a player of Williams’ caliber.

With the 11th selection, the Charlotte Hornets were very fortunate to get a talent like James Bouknight. With Bouknight projected to go as high as 6, Charlotte couldn’t pass up the athletic youngster.

Pick #12 Josh Primo by the San Antonio Spurs was definitely the most surprising pick of the entire draft. No one had Primo in the lottery on mock drafts, but being the youngest player in the draft is quite intriguing when it comes to potential.

The Indiana Pacers reportedly liked Corey Kispert at 13, but rumors of a shaky draft workout with the club resulted in them looking at other guys. One of those other players was Chris Duarte, who the Pacers ultimately decided to choose.

To end the lottery at pick #14, the Golden State Warriors may have found themselves another steal in Moses Moody. Moody was a projected top 10 pick during the college season, but fell to Golden State, an organization that’s in a better situation than any other team in the 2021 lottery. 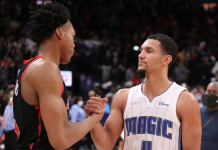