The Detroit Pistons have landed on a decision to select guard Cade Cunningham with the No. 1 pick in tonight’s draft, according to Adrian Wojnarowski.

Pistons officials traveled to New York on July 28, met with Cunningham one final time and finalized the decision to choose him at No.1 in the meetings this morning, Wojnarowski also notes.

Cunningham, who is a 6-foot-8 guard, played one season at Oklahoma State where he was named Big 12 Player of the Year and a consensus All-American.

The 19-year-old also won the Wayman Tisdale Award for the top freshman in college basketball.

In last year’s draft, the Pistons selected Killian Hayes (No. 7), Isaiah Stewart (No. 16) and Saddiq Bey (No. 19), and they will now add a talented Cunningham to the mix.

The Pistons will continue to get trade offers from teams looking to move up the board to No. 1, so there’s always the possibility that a proposal could blow the Pistons away, according to Wojnarowski.

“The organization has a lot of great people within it,” Cunningham said last week. “I mean, starting from the owners, Troy Weaver is a great GM, and then, you know, all the way down. They got just great people throughout. So I learned a lot on my visit. If they take me, I’ll definitely be excited to be there.”

With Cunningham going No. 1 overall, the Houston Rockets (No. 2) and Cleveland Cavaliers (No. 3) continue to lean toward Jalen Green and Evan Mobley, respectively. 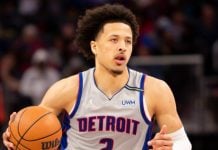 Cade Cunningham on Rookie of the Year: “I think I made a strong case for it”