San Antonio Spurs are stuck in the middle of the NBA with their current roster, and a change of direction could be on the cards for the franchise this offseason.

According to Zach Harper of the Athletic, the San Antonio Spurs could opt for a fresh direction this offseason, which means they could be willing to move on from two of their top guards.

“While it seems unlikely the Spurs would move their pick, keep an eye on them being active with the trade machine around the draft. The Spurs have to figure out where they want to be as a franchise and what their plan is moving forward. They’re kind of stuck in the middle right now. Murray and Derrick White could both be gettable, according to league sources.”

Both guards are considered excellent perimeter defenders. During the 2020-21 campaign, Murray averaged a career-high 15.7 points, 5.4 assists, 7.1 rebounds, and 1.5 steals per game. 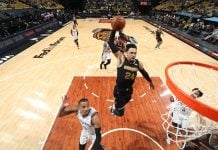