The capital of Germany will host the Turkish Airlines EuroLeague Final Four for the third time next season as Euroleague Basketball brings the season-ending event back to the magnificent Mercedes-Benz Arena in Berlin for the weekend of May 27 to 29, 2022.

The City of Berlin has been an outstanding partner in both previous Final Fours there, in 2009 and 2016, and has already begun the planning stages for next year’s accompanying events, including the FanZone and the Turkish Airlines EuroLeague Awards Ceremony.

Germany will become the first country to host Final Fours in consecutive seasons, following the 2021 edition at Lanxess Arena in Cologne.

The decision to finish the 2021-22 season in Berlin is driven, in part, by the importance of Germany as a strategic market for Euroleague Basketball growth. 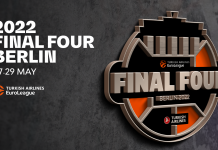 EuroLeague could replace third-place in the Final Four with EuroCup Final, per report