Nikola Jokic was officially named the 2020-21 regular season MVP after an incredible year with the Denver Nuggets. The Nuggets’ superstar told reporters on Tuesday he was surprised to win the award.

Jokic received 91 first place votes to become the first second round pick to win the award and the first player in Denver Nuggets’ franchise history to take the trophy home.

“It doesn’t affect me that much, to be honest. When I see the list, of course there’s great names. It’s an honor. I never thought I would be on the list. It’s a surprise. I’d rather win a championship than MVP,” Jokic said.

Denver is in the second round of the NBA playoffs facing the Phoenix Suns for a place in the Conference Finals. Other first place vote-getters included Stephen Curry, Giannis Antetokounmpo, Chris Paul and of course Joel Embiid, who came second in the ballot. 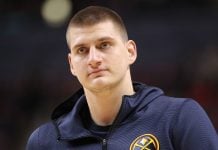