During his appearance on the All The Smoke podcast with Matt Barnes and Stephen Jackson, retired NBA player-turned-TNT analyst Shaquille O’Neal looks backs on his time in Miami and discusses his relationship with Dwyane Wade and the team’s 2006 title. Plus, he talks about the end of his career in Phoenix:

Shaquille O’Neal reveals his pick for the Lakers coaching gig 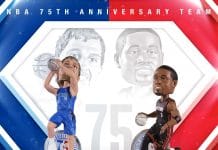 Jayson Tatum: “Very lucky to have Al Horford as my teammate”