James Wiseman is expected to miss time due to injury, however, the rookie big is already planning ahead. The second overall pick of the 2020 NBA Draft plans to hit the gym with Hall of Famer Kevin Garnett this offseason.

“One thing his mom told me recently was that James already cannot wait for the offseason to train with Kevin Garnett,” Warriors’ beat writer Connor Letourneau said on the “Warriors Off Court” podcast.

“They actually have reached out to each other, and they do have plans to work together this summer.” It’s not clear if Wiseman will return this season, after suffering a torn right meniscus injury.

Letourneau reports that Garnett and Wiseman are in contact to train together in the offseason. Wiseman experienced several ups and downs this season.

He has averaged 11.5 points and 5.8 rebounds per game before suffering a potential end season knee injury vs. the Rockets Sunday. 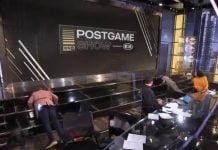 SKINS is supporting Spencer Dinwiddie in his recovery back to the...