De’Aaron Fox was definitely not happy after the end of the game between the Sacramento Kings and the Utah Jazz. The explosive guard voiced his displeasure over several refs’ decisions in the post-game media session.

(via The Sacramento Bee):

“S— was godawful,” Fox said. “Mine wasn’t even about me getting there and things like that. It was about the calls they were getting on the other end. If you’re going to call something on one end, call it on the other end.

And if somebody’s trying to talk to you, you can’t get in your feelings so quick to where it’s not even a hostile conversation and then you’re saying don’t talk to you.”

“F—ing terrible,” Fox said on one official. “He was terrible and then when you tried to talk to him, he acted like he didn’t want to hear anything or he was too good.”

The Kings were not able to put a stop to a five-game losing streak, despite Fox’s incredible night in Utah. The Kentucky product went off for 30 points and eight assists on 11-of-20 shooting night. 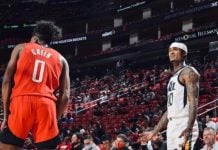