The full details of the trade:

The Celtics were added into the previously-reported deal between the Bulls and Wizards that originally saw the teams trade Gafford and Hutchison for Brown and Wagner, respectively.

With Theis, the Bulls get a solid backup center to Nikola Vucevic who they acquired from the Orlando Magic in a blockbuster deal.

He will likely now have a path to more minutes without Theis. 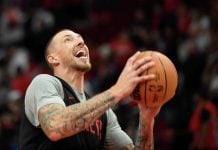