PJ Tucker officially joined the Milwaukee Bucks in a multi-team trade between the Bucks, the Rockets, and the Suns. Milwaukee’s head coach Mike Budenholzer described what the veteran forward will bring to his team.

(via Eric Nehm of The Athletic):

Tucker is one of the versatile defenders in the league the last few seasons. Despite his struggles this season, the veteran forward is joining a contending team.

“And then an ability to space the court and make threes and play the right way, play smart, high basketball IQ. He’s just a lot, a lot of things we’re looking for in players. Feel really fortunate to add him to our group,” Budenholzer continued. 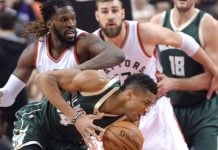