An X-ray showed that Sacramento Kings’ Marvin Bagley III suffered a fracture of the fourth metacarpal in his left hand in the team’s 122-116 loss to the Charlotte Hornets on March 15.

It’s unclear when the injury occurred, but Bagley started grabbing at his hand in the mid-second quarter and did not return.

Bagley will undergo further medical evaluation and an update regarding course of treatment will be provided in the coming days, according to the Kings.

Bagley also suffered a fractured right thumb in his second season in the NBA.

The Kings are also currently without Hassan Whiteside due to health and safety protocols, so Richaun Holmes, Harrison Barnes and Nemanja Bjelica will see a lot of minutes in the frontcourt.

They could also go with smaller lineups, as the Kings chose to start Tyrese Haliburton in the second half against the Hornets. 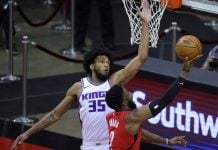 Alex Caruso reportedly a target of the Cleveland Cavaliers in offseason

Wesley Matthews says most games ‘were kind of practices’ for Lakers...