Several NBA players took to Twitter and reacted to the news that prolific golfer Tiger Woods got involved in a serious car crash in Los Angeles County.

Woods went into surgery after being pulled from the car, which suffered major damage.

Several NBA players, from Karl-Anthony Towns to Zach LaVine, sent their thoughts and prayers to Woods.

BREAKING: Rudy Gobert is at ‘him or me’ point with Donovan Mitchell 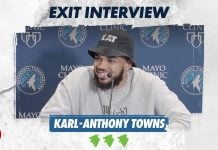