In 2019-20, Michael Porter Jr. burst onto the scene. Picked by the Denver Nuggets back in the 2018 draft, he has gradually worked his way into the Rockets’ team. Upon agreeing terms three years ago, the 22-year-old put pen to paper on a four-year deal, which expires in 12 months, according to https://www.spotrac.com/nba/denver-nuggets/. Although there’s no doubting his talent, Porter Jr. still has much to learn, and 2020-21 will be a significant season in his career. So, can he take his all-round game to the next level this campaign?

Bursting Onto the Scene

After making his NBA debut in June 2018, Porter Jr. showcased his abilities in front of a global audience. Following the setback of a long-term back injury during the previous year, the 22-year-old had to wait before stepping onto the court for the Rockets. Upon being given his long-awaited opportunities, he took them with both hands. As per his profile at https://www.basketball-reference.com/players/, he secured 3.5 field goals per game from seven total attempts. In turn, his field-goal average sat at .509.

However, for all of his talent, there are distinct weaknesses to his game at present. It speaks volumes about how much Michael Malone, the Denver Nuggets coach, trusts the 22-year-old that he only started him in eight games in 2019-20. In total, he appeared in 55 games, but it raises questions over his potential to be a regular starter.

This season, Malone has seemingly placed a little more faith in Porter Jr., starting him in six of the Rocket’s opening 13 matches. Interestingly, however, his field-goal percentage has fractionally dropped. As a super-sub in 2019-20, his tally was .509. Now, as a more-frequent starter, that figure has fallen to .504. Moreover, his free-throw percentage has also gone down from .833 to .818.

Can He Become the Next Star Small Forward?

In a report regarding which players to look out for in 2020-21, https://www.si.com/nba/2020/ mention Porter Jr., but touch on how he can often cut a frustrated figure. Previously, his shot selection has been somewhat divisive, and that was on show in the Rockets’ recent defeat to the Milwaukee Bucks. In the fourth quarter, the 22-year-old took on a risky shot that his teammate, Nikola Jokic, criticised for poor timing.

To fulfil his potential, the Missouri-born small forward has to eradicate unnecessary plays and focus on his all-round game, including defensive phases. In the past, arguably the best player of all time, LeBron James, reached out to Porter Jr., telling him to settle for nothing less than “greatness for yourself”.

This player clearly practises what he preaches. Through sustained application, James has created a legacy in which many now perceive him to be the best NBA small forward of all time. Aside from his on-court success, the 36-year-old has been the face of the association’s off-court growth in the entertainment industry. In the highly-popular gaming series, NBA 2K, James was the cover star for the 20th Anniversary Edition in 2019.

Moreover, his impressive rise to superstardom has aided basketball’s involvement within more diverse gaming streams, including at online casinos. For example, amongst the promotion-awarding operators highlighted at https://www.bonusfinder.com/uk/online-casinos, basketball-related titles, such as Basketball Star Slot, are featured. This highlights LeBron James’ undeniable success, both off- and on-court, and makes him a fantastic role model for Porter Jr, who will do well to heed the superstar’s advice.

Playing for His Rockets Future

At the time of writing, there are no suggestions that Porter Jr. is in line for a new contract in the near future. As such, the onus is on him to prove that he belongs and can contribute as a first-choice starter. In order to do so, he must cut out selfish plays and accept that he must evolve to become a reliable team player. 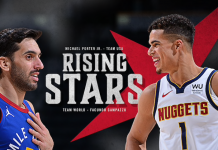 Michael Porter Jr on Facundo Campazzo: “He’s willing to put his heart on the floor every night and that’s contagious”

Michael Porter Jr. regrets for the wrong decision of Nuggets in final play vs. Wizards

Kyle Kuzma throws it down on Michael Porter Jr.

Andre Drummond excited about getting a win at Staples Center with...