Montrezl Harrell was the second top scorer for the Los Angeles Lakers with 21 points, just behind LeBron James with 28, as the defending NBA champions recorded their fifth straight win by downing the Oklahoma City Thunder.

“We did that,” the 27-year-old forward said. “Unfortunately, it went to overtime but we continued to keep playing and we came out with a big win.

“The same thing we’re going to come back to do on Wednesday and the game after that. But like I said, it’s one game at a time.” 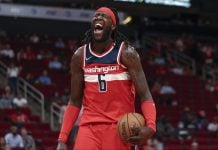 Montrezl Harrell on year with Lakers: “I damn near felt like I had a season off”