A four team deal between Houston, Brooklyn, Indiana & Cleveland has been the talk of the NBA. James Harden is now a Brooklyn Net.

Bucks still just a good regular season team at the moment, lost big games against top teams: The Bucks are 2nd in the East, but have lost all their matchups to current playoff teams. Lost games to Lakers, Jazz, Celtics & Nets.

Jayson Tatum returns tonight, Celtics have tough schedule ahead: Jayson Tatum is back tonight vs the Bulls. Boston’s next 10 games consist of teams like both LA squads, Utah & Phoenix.

Indiana trades Oladipo in return for Caris LeVert, Jeremy Lamb playing well since returning: Caris LeVert is now on the Pacers, but out with a kidney issue. Veteran scorer Jeremy Lamb returned from injury on the 20th and scored 22 points vs Orlando in his second game back.

Nets get Harden, team defense still a problem: Brooklyn finally gets James Harden after many off-season rumors. Defense is still a concern though, they let up 147 points vs Cleveland on Wednesday.

Collin Sexton has developed into a top scorer, Cavs adds pieces in trade from Brooklyn: Collin Sexton went off for 42 points in a recent win. Jarrett Allen & Taurean Prince were recently sent over from the Nets.

Hawks still haven’t played with a full team yet, notable names have missed time: Despite the lack of a full roster early on, Atlanta is #7 in the East at 8-8. Bogdanovic, Gallinari, Rondo, Dunn & Okongwu have all missed time.

Toronto starting to pick it up, hard fought win over Indiana on Sunday with guys out: The Raptors are playing much better as of late. Bench players like Stanley Johnson, DeAndre’ Bembry & Yuta Watanabe played well in their last win.

Lauri Markkanen shooting efficiently early on, Bulls will continue to be up & down: Chicago’s Lauri Markkanen is shooting 47.5% from the field. The Bulls are competitive when healthy.

Wizards play first game since January 11th, still have a bunch of players out: Russell Westbrook is back from injury. Key guys like Rui Hachimura, Deni Avdija & Davis Bertans will miss time.

Miami & Orlando have dealt with unfortunate circumstances all season, falling in East: Jimmy Butler has missed a bunch of time for Miami & Markelle Fultz is out all year for Orlando. Both teams can’t find a rhythm.

Both LA teams look impressive, the West Finals fans wanted last year may finally happen: The Lakers & Clippers look ready to dominate the West again. A battle of LA West Finals matchup could be possible if they can stay healthy and earn top seeds.

Utah Jazz on 8 game winning streak, Clarkson & Ingles have been polished off the bench: The Jazz have a team full of vets with great basketball IQ’s. Jordan Clarkson & Joe Ingles are both shooting over 40% from three.

McCollum & Nurkic remain out, Portland needs bench to step up: The Trail Blazers lost two starters and need their bench to play well. Damian Lillard is very capable of leading this group with CJ & Nurk out.

Denver & Memphis go on winning streaks after inconsistent starts, key players return: Experience is something both of these teams have that results in wins. Michael Porter Jr & Ja Morant are back playing for their clubs.

Dallas has many different players contributing, Luka putting up MVP numbers: The Mavs have 6 guys averaging double-figures in points. Luka Doncic will need to keep playing amazing for Dallas, as they’re only #9 in the West.

Rockets finally move on from Harden, get Oladipo in trade: Houston traded James Harden and now have Victor Oladipo. DeMarcus Cousins had 28-17-5 in their last win.

OKC & Sacramento either get blown out or play great, not sure what to expect on nightly basis: Both of these teams struggle very badly when their top players can’t get going. Offense can be a major problem, two clubs that depend on their starters quite a bit. 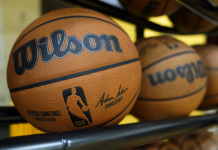