Anthony Davis committed his future to the Los Angeles Lakers for the foreseeable future after signing a five-year, $190 million contract with the defending NBA champions. It all starts with the 2020-2021 season. His teammate Jared Dudley recently said he expects AD to go for the MVP this season.

But, Davis himself is not setting personal goals such as winning the MVP. The goal for him is to repeat as the NBA champion.

“It’s hard for me to set goals like MVP, DPOY, I like to let those things fall into place. If I play like I’m supposed to up to my potential, those things (can) happen… The goal is to win another championship,” Davis said per Mike Trudell. 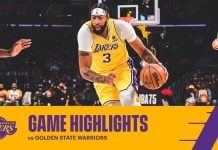 Day Seven Of 2021 NBA Preseason: Under-The-Radar Players Who Stood Out